What North Americans Should Know Before Investing in Panama Real Estate

If Latin America had parents, Panama would be their favorite child.

Their trophy wall would be cluttered with honorable titles:

Even the pickiest checklist would be cluttered with green check marks, as year after year Panama continues to improve.

As a result, more North Americans are discovering and embracing Panama. These are people from all walks of life– savvy investors, ambitious professionals, and retirees– who have found Panama to be a particularly attractive place to invest.

If you’re considering joining the ranks, there are a few things you should keep in mind.

I’ve been guiding Expats into the right real estate investments for many years, and these are a few themes I find myself continually discussing with my clients.

Panama is Politically and Economically Stable

Panama is one of the few countries “south of the border” that is stable from both an economic and political standpoint.

Its steadfast economy is deeply rooted in international investment from around the world– rendering Panama uniquely safeguarded against a crash in any one particular market.Never before was this more appreciated than during the U.S’ recent economic recession, through which Panama’s real estate market held strong.

As for political stability– Panama has shown an unwavering commitment to democracy since having ousted the infamous Noriega from his dictatorship in the 1980’s. (This year’s presidential election, in which former President Martinelli was not “reelected” despite record-high popularity, lays proof to that.)

This makes Panama a beacon of light for those looking to diversify their portfolio.

…But It’s Not Perfect.

While most North Americans who invest in Panama real estate do so sans-regret, you’re still must proceed with caution.

Panama is a developing country, and in some ways still operates under the rules of the “wild west.”

The plain truth is: You’re a foreigner in an unfamiliar place, and this makes you easier to take advantage of.

In order to avoid becoming somebody’s sucker-of-the-week, you want to:

Doing Your Due Diligence 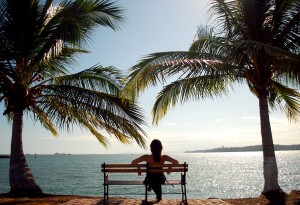 I always tell my clients, you should exercise twice the caution when buying real estate in Panama (or any country for that matter) than you would in buying back home.

Assuming you’re not Daddy Warbucks , this means quite a bit of diligence!

Take the time to research Panama, and the specific area you’re considering buying into. No place is perfect, regardless of how green the palm fronds or glittering the sea. Learn as much as you can before showing up, and you’ll be more likely to make a smart and well-balanced decision.

Work With a Reputable Developer

Compare a photo of Panama City today verses 7 years ago, and you’ll be astonished at the dramatic difference in the skyline. Panama’s economic boom of the last decade spurred an arms race of condo construction… and not all condos were created equal.

Sadly, many of the no-name developers on the scene were cutting corners in ways that weren’t immediately apparent. Fast forward to current day, and those unlucky property owners are finding their investments greatly depreciated, or worse, having been deemed unsafe.

This is why you want to stick with a reputable, established developer with a proven track record. It’s why I represent Empresas Bern– an esteemed high-luxury developer with over 125 successful projects and a rock-solid reputation.

The newcomer looks at Panama and sees thousands of options in the sky; the seasoned investor knows who to work with.

Trusting The Person You’re Working With

These days, it seems like everybody and their uncle is an authority on Panama real estate.

The market is flooded with Panamanians and expats alike thinking they’re experts just because they’ve been here a year or two.

And while many of these so-called gurus have good intentions, they do not know the in’s and out’s of the Panama real estate market.

You needn’t worry about finding an agent, or even finding one that speaks English.

Focus on finding one that you trust, and that actually knows what they’re talking about.

Once you step foot in Panama, there will be no shortage of business cards shoved in your direction.

But don’t be fooled by exaggeration, omission, or the best-friend approach. Look for someone that gives it to you straight, without the spoonful of sugar (or shot of tequila.)

Before you consider “working with someone,”  pose these questions to them.

Whether or not their answers are good enough I’ll leave to your judgment.

Just know that these questions play a big part in someone’s ability to guide you into the best possible investment…even if they tell you otherwise.

I like what you write, interesting way to make people to trust you. I live in Canada and I am thinking for the last 2-3 years to relocate in Panama. I never been in Panama but this year is the year!

Thanks George – and if you are thinking of relocating to Panama, a recon trip is the way to go – time it to escape the cold Canadian winter and enjoy some sun!