“Well It’s Not Exactly The Ritz”

There are few places I love more, to simply sit back, relax and churn out the paperwork, than the Social Area at Coronado Golf. Taking up the entire 32nd floor of Coronado’s iconic building, the breeze is always available and the view looking out on the mountains and the gentle Pacific Ocean is both calming and exhilarating. I always find myself looking longingly into the pool which always sparkles in the sun.

The other day I was there with my head buried in emails when I heard a woman say quietly to her husband, “Well it’s not exactly the Ritz!”

Enjoy It For What It Is

“Enjoy what it is,” he calmly said back to her. “We bought it at a charity auction and so far, I’ve enjoyed it a lot. It’s a community and every person we’ve met is not only interesting but unique. Enjoy the difference.”

I couldn’t help but look up and smile as I caught their eyes. They nodded back, their legs crossed with hands wrapped around plastic cocktail glasses. It was a little after five o’clock and the sun was beginning to wane.

“I heard there is a spa over at the golf club. I’m not sure what it’s like. I mean the prices. What if they don’t have clean towels and the masseuse is not adequately trained?” she continued.

The man looked up and simply said, “take a shower afterwards. The towels are clean downstairs and if the massage isn’t good, you can always ask them to stop. You might be surprised.” The couple was well-dressed and her hair perfectly colored and cut. Her nails manicured.

I know most of the owners in the building, but there are often renters around that I don’t know, so I assumed they were renting. I tried to concentrate on the emails, but couldn’t help but wonder what they meant that they had “bought it at a charity auction.” Could someone have bought an entire condo at a charity auction?

“Driving up, there are potholes,” she continued.

The Roads Could Stand Some Improving

“The roads, once you get off the main highway, could stand some improving,” he said to her. “I hear they are building another 33-story condominium complex adjacent to this one so maybe they are waiting until that’s finished to fix up the roads.”

I couldn’t wait any longer. “The roads are bad leading up to this building,” I said back to them. “The spa is fabulous and very inexpensive compared to North American rates. But I think you’ll find it every bit as good as you would in the States. And don’t worry about the cleanliness—it’s spotless! In fact, you’ll be paying what is considered top dollar at the club spa. I get my massage for $20.” I got up, smiled and held out my hand.

“I’m Liz Larroquette and I’ve lived here for almost ten years.” I said shaking both of their hands, smiling. “ And you’re right, it’s not the Ritz Carlton.”

I sat next to them and they both started talking simultaneously. As I had suspected, from their easy drawn out accents, they were from the south in the United States. They had purchased a week of vacation time at one of the residences in Coronado Golf at a charity auction. I breathed a sigh of relief that the condo hadn’t been raffled off, as I’d of bought tickets!

“We didn’t know what to expect, but we are always looking for interesting places to visit,” the husband began. “We hadn’t been to Panama and we’ve heard about everyone coming down here to retire so we decided to try this place,” he continued, gesturing toward the ocean. “I like it a little better than my wife does,” he said simply.

“I like it,” she rushed to interject. “It’s just a little like being a cowboy in the wild west. There are some things I’m not used to,” she gave a little laugh.

I returned the smile. “I think you have described it perfectly. Panama is a little bit like the Wild West. And you’re right, Panama is not the United States.”

The couple continued, anxious to talk. “The owners let us use their vehicle as part of the deal so when we were driving down the highway we noticed there are so many people who walk here. Don’t they have cars?”

“No. The monthly minimum wage is right at $500 so they walk, or take one of the many buses. A lot of the major employers arrange transportation for the employees,” I responded.

“If they make $500 a month, you could have a full-time employee,” said the wife, clearly rolling the possibility in her head. “I mean to come in and clean couldn’t be very much.”

The woman stared back at me, but she was easy, warm. I liked her in spite of her Ritz Carlton comment. “So, are you interested in maybe retiring in Panama?” I inquired. “You know there is a new building going up next door that is like the Four Seasons, just less expensive.” I was tired of the Ritz. “And in closer to the city, Casa Bonita is absolutely first-class. It’s part of a complex which includes a five-star Westin hotel.”

I”m Not Sure We’re Ready To Leave The US

“We’ve been looking at a place in Naples, Florida” said the women hesitantly. “I’m not sure we are ready to live outside the United States.” I smiled and nodded. Panama isn’t for everyone.

“It’s pricey in Naples,” said the husband. “What does a place here run,” he replied. “Well, it depends,” I started hesitantly. “You know the unit I think you are in cost about $240,000 and it’s designed for two bedrooms although they decided not to interrupt the view and didn’t build out the second bedroom.” I knew the couple who had made the donation and that they didn’t mind begin open about the cost. “We have people here that have taken two or three units and combined them. The Penthouse units run around $750,000. There are some custom, stunning places in this building.”

“The monthly fee here is less than $200 and the country club comes with the purchase price. Did you get to play the Tom Fazio designed course?” I continued.

“We did. Very nice and tomorrow we are going over to Vista Mar. That’s a beautiful course too. We are looking at the Country Club of Naples. It’s sort of middle of the road and the initiation fee is $20,000; the monthly dues about $850. Then you have the dining minimum of $200 a month and that doesn’t include liquor and beer at the 19th Hole. Oh, and the capital dues are $254 a month.”

No Dining Minimum; No Initiation Fee; No Capital Dues

“Oh, you have to pay in Naples for everything year round. They don’t care if you aren’t in town and there’s no beach club. Just golf, plus a small swimming pool and some tennis courts. It’s mainly golf,” the husband continued. “I’m looking at about $8200 in property taxes a year, what is it here?”

“The government encourages foreigners to move in, so the property in this building has 18 years of tax free credits.” I smiled. “Panama isn’t for everyone,” I continued wanting this conversation to take another turn. It was uncomfortable. Most of my clients couldn’t consider a two million dollar retirement property, thousands more in maintenance fees and golf club memberships.

“Panama is developing” I reminded the couple. “The property prices have risen about 10% each year and that’s predicted to continue. There isn’t a lot for sale here right now, but, remember it is like the wild west in several of ways,” I continued. “It’s certainly not Naples.”

“No”, the husband laughed, “the property valuation in Naples has dropped steadily since 2005. It’s just now beginning to rise again.”

“It’s very nice in Naples,” I continued. “Here the staff wear polo shirts with the logo of the building. They don’t all speak English and certainly aren’t as smooth as what you’ll find in Naples. Sometimes we ration the water because of the dry season but the facilities really are top notch and we are considering drilling a well for the building to eliminate the water issue.”

“It’s just different here,” he said. “And, I like it. As nice—well perfect—as it is in Naples, there is something charming about the rawness of this place. And to think about property value going up without so many repeating monthly fees,” he let his voice trail.

Will Our Friends Want To Come Down?

“But do you think our friends will want to come down here,” said the woman as she spread her hand toward the ocean.

“Oh, I don’t know,” joked the husband. “I’d really hate to be in an affordable location that overlooks the Pacific Ocean, with an 18-hole golf course, a par-three executive course and a nice driving range, top notch restaurants with no dining minimum, tennis courts, a beach club and more pools than you can swim in, plus inexpensive massages and cleaning people. Sounds really awful.”

The woman smiled. “It would be nice to have a little more flexible income for those all-inclusive cruises, we like. I saw a great Mediterranean one the other day. A new ship.”

Let’s Leave The Kids A Little

“Amazing,” said the man. “Amazing,” as he patted her leg and smiled. “You know we built the business together,” he said looking me in the eye. “She knows what it is like to count every penny and work seven days a week. We don’t know what to do, but we do want to leave a little bit to the kids.” 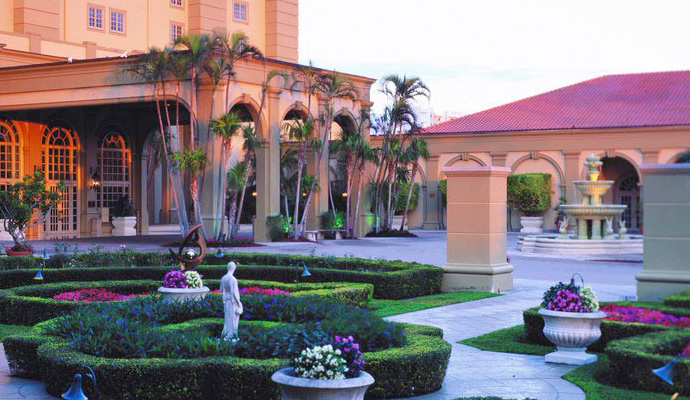 The Ritz Carlton in Naples, FL is close to perfect, but is that really what you are looking for?

2 Replies to ““Well It’s Not Exactly The Ritz””

I’m considering giving up US citizenship. How difficult is it to
get a Panama pass port? Wallace Goodlett

It’s not difficult… it just takes time. I’m not a lawyer though. You’re best talking with one here to discuss the specifics.