Last year I was lucky enough to be asked to participate in the filming of an episode of House Hunters International (HHI). It took five days to film a television show that lasted 22 minutes, not counting commercials. We filmed all around Panama City, the Pacific Ocean beach area and Coronado. The first show aired in late November 2014, but they have shown it several times since and after every airing, my inbox is full of questions.

Viewers are generally shocked at the low prices for newly built condominiums with stunning views of the ocean, the first-world amenities and the variety of individuals who choose Coronado as a place to call home. The filming highlights a couple from the States who bought a home in Coronado Golf for $238,000 even though they had a budget of $500,000. After they filmed the initial decision on which place to purchase, the crew came back and filmed the condo after it had become a home.

It’s Not That Easy! 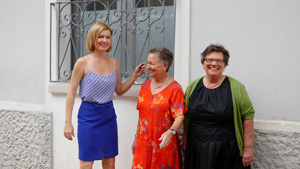 I love how they did the show, but I also want to tell the audience that HHI made everything look easy. After the couple decided which home to purchase, the show immediately cuts to them drinking wine on the 30th floor balcony enjoying the sunset. Somewhere in all that, I want to scream—“it took nine months of work and patience after the purchase to take care of the details.”!

I work as hard as I can to ease people into getting the basics taken care of once the property is theirs. Those basics would include things such as electricity, water, cable, cell phones, mail and opening a bank account. There are always some challenges. Always.

Not How It Works

Individuals who come from North America especially, are used to workmen showing up when an appointment is scheduled. They take for granted the price they have just been quoted is the same price the next person will be quoted for the same task. They assume the government is going to work like the government works in their home country and that the bank will be more than happy to open them an account. That’s not how it works.

If you decide to purchase a property in Panama you need to understand that things are not going to run exactly the same way as they do in your home country. People here live differently. They speak Spanish. They are not as adept with the internet. People worldwide know how the government in their country works because they have grown up learning the rules over a lifetime. Panamanian government agencies have their own rules developed over a different lifetime. Many of my buyers do not understand why things are done differently in Panama. I will try to explain some of the main differences, but if I can advise you of anything it would be to lighten up, stay calm, try to learn a little Spanish or find someone who is fluent and can help, understand why the Panamanians live differently and smile.

Mañana! Tomorrow Is Another Day

We live pretty close to the equator and things are hot. People move slower and they enjoy a much more laid back lifestyle. They think North Americans are really uptight and they have a point. It’s very common in Panama to make an appointment for some service only to have that person not show up. Mañana! Tomorrow is another day. Their mother got sick, the truck broke down, they didn’t have money for gasoline. They absolutely believe the world will not stop spinning if they don’t show up.

Two Prices For Everything

There are at least two prices for everything. I wish I could tell you that Panamanians who see an expat coming, don’t often times figure they can charge a little more. It’s really true, there are Gringo prices and then there are the real prices. My suggestion is to find a local Panamanian who is fluent in both Spanish and English and pay them to negotiate everything from cable installation to having the air conditioning cleaned.

The couple in the HHI episode found, after nine months, they had been paying twice as much for their cable service and that with the help of a bi-lingual local they went from $89 to $43 a month. That covered their internet, television and a premium sports package. Let me know if you need help, I can suggest some reputable locals.

People generally need a cell phone and in Panama you will have eight numbers as opposed to seven used in North America. If the Panamanian telephone number has a six preceding the other numbers, it’s a cell phone. Anything with seven numbers is a land line.

In Panama, not all cell phone companies are created equal. North Americans are used to 4G service and unless the cell company can support that, you will not have 4G service regardless of the type of phone. There are a couple of ways to go—bring in an unlocked cell phone and buy a SIM card from a local company that supports top-of-the-line service. Consider Digicel or Claro. Most companies have plans that are month-to-month and provide data packages. If you want to go month-to-month you have to go back every month, on the day that is your anniversary (you have to remember the day because they won’t tell you; they’ll just cut your service) and renew your contract. If you can avoid it, don’t go in early because they’ll reset for that day and you’ll lose the balance of your days.

You may also purchase an inexpensive local flip phone, but data is limited and you’ll have little more than a phone which will ring and one from which you can make calls. If that’s good enough, it’ll be about $20 for the phone with $5 or $10 phone top off cards you can purchase at any grocery or mini-super.

No Addresses; No Mail

Don’t expect a mail man because they don’t exist in Panama. There are no real addresses either. A well regarded lawyer will tell you to meet at the office “located cater-cornered from the Universidad Interamericana de Panama, in the tall white building on the eighth floor.”

There are Post Offices in Panama and most cities have one, but Coronado does not. In the cities where they have one, they only offer Post Office boxes and you are told never to send anything of value through the mail. Letters from the United States will take weeks if they ever arrive. Try Mail Boxes ETC., but be prepared to spend more than you are accustomed. They’ll give you a box and for a premium they’ll go into Panama City and scoop up letters and packages from a Miami address, which they provide.

Labor in Panama is inexpensive. Minimum wage results in about $500 a month and that has just been increased. A really good cleaning person can be hired for $4.00 an hour. Five hours, plus a $2.00 tip for a total of $22.00 will result in a clean house, windows included. Oddly enough, because labor is inexpensive, you can go to a store such as the Novey and buy a grill and tell them you want it delivered. Employees will be standing around waiting to follow you home in the company truck. Sometimes, the results are better than you expected!

Most stores that offer appliances, such as Panafoto, will schedule a delivery and will show up within a reasonable amount of time, but you’ll pay retail. If you purchase something on Craig’s List, don’t expect normal deliveries. Chill. The delivery people will show up when they show up—let’s hope you got a bargain.

Paying Bills Via The Internet

If you are used to paying your bills via the internet, take a deep breath. It can be done, it’ll just take a while and you’ll need to watch every transaction because sometimes, without reason, the money you thought you sent will be returned to your bank account without notice. Consequently you’ll face disconnection when you thought you’d paid. Some companies such as Cable Onda will deduct your monthly payment via a debit or credit card. Sign up for that every time!

Of course, you’ll need to have a bank account. It used to be hard, now it has become harder. If you are a US citizen and have never heard of FATCA, you will. FATCA is the Foreign Account Tax Compliance Act and every country that counts is on board with this broad reaching American ruling. The law was quietly passed in 2010 and became fully functional in 2014. Banks must now report to the Internal Revenue Service (IRS) bank accounts opened in a foreign country by a US citizen. That allows the US Government to tax everything in the US as well as foreign countries. It’s a lot of paperwork for the local banks, and it might be here to stay. Let’s see how the repeal goes “FATCA Repeal: Looks Like Good News for 7.6 Million Expats“.

You’ll need help opening a Panamanian bank account and be prepared to produce letters of recommendation, cash and whatever financial records are de jure at the moment. Fortunately I’ve been able to develop relationships with bankers and can make suggestions.

But I Didn’t Know I Owed The Bill

Electricity is another one of those things that House Hunters International did not cover when showing the happy, relaxed couple enjoying the view of the Pacific Ocean. It took several trips to the electricity office located in another city to get things running in that 30th floor condo. Cash was required and because the couple travels, they are always fighting the fact the company hand delivers the monthly bills. This would be another time when you’ll want to find a local who can negotiate on your behalf to set up the account as well as arrange for email notification of bills. It can be done, you just have to know to ask!

Panamanians are not used to people wanting to pay over the internet or receive bills via email. It’s new to them so it’s a little uncomfortable. In this country you’ll see locals lined up outside the Banco Nacional de Panama, every Friday to pay their bills in cash. They have been paid in cash and they go immediately to take care of business. That’s currently the accepted way.

Being Prepared By Knowing The Facts

I hope I haven’t been discouraging, but rather, simply honest. In Panama you get to enjoy a fabulous lifestyle for a lot less because the country is not yet sophisticated. I like to think of Panama as a teenager who is growing up fast. Every month I hear that more types of bills can be paid on line. A local bank, Multibank, will set up an account quickly if you just present with the proper documentation. To capitalize on all the good things Panama offers, you need to be realistic, working the culture as opposed to chafing at the differences. My advice is to simply enjoy the journey. Your new lifestyle will be better than you ever imagined.

2 Replies to “Lights, Cable, Water—Getting Turned On In Panama”

Thank you Liz for being up front and sharing this information! There are differences, and I learned that having spent four months in Panama. The time spent was a lesson, you cannot dictate to others a western way of life. Liz is a valuable source of information, she will answer your questions. I purchased beach side property with the knowledge that their will be “bumps in the road” when the building is complete and ready for move in. I would recommend learning Spanish, and ask questions for those that are serious about a move to Panama.

Very informative, thanks. Happy to have made your acquaintance.