Is Panama the Next Singapore?

I have always felt there was only one place like Panama and that was Panama itself.

First, there is the unique geography. We are just a small isthmus linking the two Americas, and because the geography is so important to trade routes globally, Panama has had to fight for centuries to gain true independence. Today, we have that independence, but so much of who we are is a reflection of our earlier occupiers. We are a young country and thought to be third world, but the importance of our location is allowing us to rapidly become a destination of significance.

I recently had a client who was being transferred to Panama City from his home in Singapore and I rapidly learned Panama might not be as different as I once thought. The more he spoke of Singapore, the more parallels I discovered. It was like meeting a long-lost sister your parents failed to mention. Could it be that Panama will be the next Singapore?

I will be honest, I didn’t know very much about Singapore, but as my client and I drove from Panama City to Playa Veracruz and on to Costa del Este looking at properties where his family would soon call home, I learned a great deal. Mostly it all surprised me.

“The weather is pretty similar,” he said as we walked from Casa Bonita to the five-star Westin Resort for lunch. “I looked it up,” he continued, “Singapore is only 89 miles or one degree from the equator. Panama City is a bit further, about nine degrees, but both are pretty warm year-round.”

He told me he was pleased about the weather saying his three girls really were island children and if the temperature dipped into the seventies they thought it was freezing. “They’ll be fine,” I interjected “it’s warm in Panama. We have a rainy season and a dry season, but overall the sun shines most days.” He nodded in agreement.

I learned Singapore was smaller than Panama and was a city-state consisting of only 239 square miles. Relatively speaking both countries are tiny even though Panama has 29,157 square miles, but it is less than the size of the state of South Carolina. The population of Singapore was 3.55 million in 2016 and in Panama, the total was 4.05 million that same year.

Singapore as a city is more dense than Panama City, but both skylines are dotted with skyscrapers overlooking great bodies of water. The buildings are new and shiny with the logos of multi-national corporations.

But the small size of the two countries was not what I found interesting and comparative. Singapore is a dazzling example of growth and economic importance globally. It is clean and progressive with world-class schools and medical facilities. Most multi-national companies have a presence in Singapore and their airport is the best in the world. There are four official languages of Singapore—English, Mandarin, Malay and Tamil—but since 1966 all students were mandated to be bi-lingual, with English the language of education and business. Virtually everyone speaks English.

Learning English Is The Law

“Are you aware that it is now law in Panama that school children receive a bilingual education?” I asked. “Panama is the first country in Central America to mandate that English is taught in public schools. The law was enacted just last year by our president Juan Carlos Varela.”

“The ability to speak the international language of business was key to Singapore becoming the capital of commerce in much of Asia. If Panamanians speak English, then they will also be on the world stage. Singapore took care of the important elements,” he continued. “Things such as education, employment, health care, infrastructure, quality of life,” he continued.

I have always believed Panama would rapidly move from a third world country to first world, but as I spoke with my client, I became almost obsessed with what factors took Singapore from a backwater island the Malaysians didn’t want, to a world power in a single generation.

The Importance Of Geography

“Our geography is important,” began my client. “Singapore is a very important trade route from Asia to the rest of the world. Of course Panama is in a similar situation with the Panama Canal, but location was only one of the keys to Singapore’s growth,” he continued.

“We were originally part of Malaysia, but on the morning of August 9th, 1965, the Parliament of Malaysia voted 126–0 in favor of expelling Singapore from the federation,” he said, “hours later, the Parliament of Singapore passed the Republic of Singapore Independence Act, establishing the island as an independent and sovereign republic. It was not a stellar time in our history. Malaysia did not want us and we were so small and the people undisciplined, but we had an incredible leader in Lee Kuan Yew.”

“How did he do it?” I questioned. “How did he take something no one wanted to something everyone wanted in less than fifty years? Property in Panama holds only a fraction  of what the same property would be worth the worth in Singapore.” I let the dates roll over in my mind. Singapore gained true independence in 1965 and Panama regained control in 1999. Singapore was 35 years older.

“Today, you can’t even purchase chewing gum in Singapore because it is thought gum would detract from our cleanliness,” he continued providing an example of how far Singapore had evolved.

My client paused and gave me a little small smile. “In the early years, there were some things that went down that probably weren’t all that savory or legal. You know, people would just disappear, but generally Singapore became Singapore through good fortune and discipline. English was mandated and the citizens were held to a higher standard. 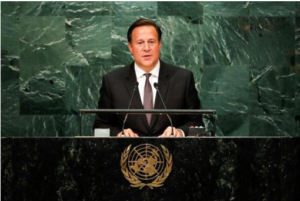 Almost immediately we became a member of the United Nations. We wanted to play on the international stage. We made the most of our location.”

Panama has been a member of the United Nations since 1945. Recently President Juan Carlos Varela address the international body calling Panama “the bridge across the world.”

“Much like you had in Casco Viejo and other areas in Panama, there were squatter settlements in Singapore. Unemployment, health issues and crime were difficult. Look at Casco Viejo today. It’s stunning and that has happened in the last decade. Where squatters once sat, there is now a luxury hotel. There are a lot of similarities when you consider today’s low crime and high employment in Panama City,” he said.

I silently considered the growth of health care in Panama with a second Johns Hopkins affiliated hospital being built in Costa del Este, the medical offices with labs and imaging facilities being built to accommodate medical tourism growing in Panama. “What about health care,” I asked as we drove along the wide streets of Costa del Este.

“Everyone receives great care,” he began. “Of course there are private hospitals that the ultra-rich access, but people from all over Asia come to Singapore for all types of cutting edge procedures. It is now just assumed, healthcare is a right not a privilege. Other countries envy our health care.

Money has poured into Panama through the doubling of the Panama Canal, allowing us to build modern infrastructure such as the underground metro system and our multiple public transportation options including sleek new buses. The water system is being improved, millions are being spent to upgrade the highways. Could Panama be the new Singapore and become first world in a decade?

“I wasn’t thrilled when I first heard I was being transferred to Panama City,” my client said honestly, “but it is sort of like I have been transported back to when Singapore was first starting out. Look at the wide streets in Costa del Este and not an overhead wire in sight. Singaporeans are very aware of the physical beauty of their country. I think Panama is similar.”

“What about the people?” I asked after nodding at the pink flowers lining the street. “I mean who is Singapore? Do the citizens have a certain look? Demeanor?”

“Singapore is populated by mostly people with a Chinese heritage, but we have a lot of Persian Indians and individuals from Malaysia. Plus, we are like Panama with a large international population. We are a melting pot,” he explained.

“Forget going back to the 15th century. Let’s start with the fact we were part of the British Empire in 1819 and one of our most famous hotels—Raffles—is named after Stamford Raffles, who was the Lieutenant Governor of the British Colony which was Singapore. They created the Singapore Sling there and you can still order it today,” he laughed. “It’s not very good!

Wanted For The Location

“The British wanted us for our location as did the Dutch in the 17th century. We sit at the most southern tip of the Malay Peninsula and we are the most important shipping route in Asia. Does that sound familiar?” Of course he was referring to our most valuable asset, the Panama Canal!

“We are also a product of other cultures. Panama also has a lot of Chinese influence,” I said. “When the French attempted to dig the Panama Canal they brought in Chinese workers and their descendants are here today. I know it’s a sweeping generalization, but I think all the convenience stores in Panama are owned by the Chinese. You cannot measure the influence of the United States. We don’t even have our own currency except for a few coins. Everything is the US dollar,” I said as we arrived at the fifty-two story Matisse tower.


The famous Raffles Hotel (left)  in Singapore is a reminder that Britain once ruled the island as it is named after the first Lieutenant Governor, Stamford Raffles. The new American Standard Hotel (right) in Panama City, is a nod to the Americans who directed the construction of the Panama Canal from this hotel.

American Standard Hotel in Panama City“I think you are going to love this location,” I said returning to my mission of finding this client the perfect location for his family. “These condominiums have just under 4,000 square feet,” I said while he stopped stock still. “Only two units per floor,” and my voice trailed as I looked back at him staring into the building.

A Lot Of Room

“Four thousand square feet,” he echoed. “I can’t imagine having that much room. Singapore is a tiny country. We aren’t even allowed to drive a car unless we have purchased a permit for something like $100,000 to own a car. Of course after you receive the permit to have a car, you have to buy the car!”

“Two parking spaces will come with the unit and no permit required,” I laughed, now thinking it was Panama two and Singapore zip! “Your little island girls will love the view of the Pacific Ocean and Panama Bay as well as the pools in the building. We may not be a Singapore yet, but we are well on our way,” I said with confidence. “It’s good you are investing today, because you never know who we’ll become,” I said as we walked toward the gleaming structure. “Who would have thought…” I said silently to myself.

One Reply to “Is Panama the Next Singapore?”

The two skylines are swapped 😉