I’m Italian! What Did You Expect?

The slices were thick but not overbearing and there were only four of them, but I smiled as I put them down on my kitchen counter and thought about what I might do with them later that evening. They were not given to me with fancy wrapping, but rather a simple zip lock plastic bag. I thought about what wine we might have on hand, what cheeses. I let my fingers rest on them for only a moment longer or it would be too late.

I have been fortunate to live all over the world and have never been squeamish about eating whatever was on offer. I have let my mouth sink into a warm freshly baked croissant with a light light dab of homemade raspberry sauce. I have enjoyed the pleasures of letting clarified butter drip down my chin as I consumed mountains of lobster meat, freshly grilled along with corn and small potatoes. I can almost taste a simple dish of angel hair pasta, sea salt, truffle oil and caviar, but I have never experienced anything like what was awaiting me in that plastic bag.

The first time they were foisted upon me I really didn’t want them. I had tried biscotti a few times and found them to be somewhere between a rock solid brick that threatened to break my molars and a soggy cookie with little taste, but I took them because they came from a client. I let them sit for at least two days before I took a bite and my food world changed.

This biscotti was unlike anything that had ever entered my mouth. It was hard, yet soft and the taste that had mellowed over a couple of days was divine. It was a new world for me. I was not above stalking. If I knew that client was baking, I found some reason to appear on her floor. Now there is no pretense—she just brings me down a little bag on the days she is creating this heavenly concoction.

“I love to cook” she always says with a broad smile. “I’m Italian! What did you expect?”

“Who Cooks For One?”

The crunchy cookies, that taste even better a day or two later, are only some of the things she cooks and shares. “It’s what I like most about living here” she once explained. “Now, it’s only me but I still love to cook. I don’t know how to cook for one. Who cooks for one? Here I can take my food and share it,” she said happily.

My Italian friend explained when she first moved into Coronado Golf, a 34-floor condominium tower, she was hesitant about walking door to door with plastic containers of lasagna, caprese salad with pesto sauce along with a serving of panna cotta with raspberry coulis. “I think people were a little afraid of me,” she said,“ crazy woman in the halls…but I let my food do my talking.” 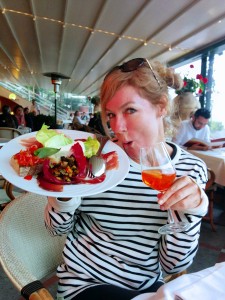 Now, there are weekly get togethers for something that falls between a dinner club and a cooking school. Residents who are attending the dinner are assigned to bring various ingredients. If it’s garlic prawns that evening, you’d better have made it to the fish co-op for fresh shrimp caught earlier in the day.

“I like to surprise people” she explained. “Once, when I told them it was going to be anchovy pasta, everyone was a little squeamish. People think they hate anchovies. I don’t use oily fish in little yellow tins. I showed them real anchovies and explained that with some fresh garlic, anchovies and oil you could produce a fabulous dish with that and nothing else other than pasta, starch water and toasted bread crumbs. Now people love anchovies! It’s one of the favorite dishes.”

My Italian friend is often joined by the Coronado Golf resident wine expert. If she is serving panzanella, a salad that has different ingredients, but always fresh tomatoes and bread, he explains that prosecco is the perfect choice. If the next course is spaghetti bolognese expect a chianti to follow.

While Italian cooking is a certainly a way into my heart, there are numerous other naturally occurring phenomenons which create special communities among the people living in this condominium environment.

A woman, whose first language is Spanish, happily stands and conducts free Spanish lessons. “My neighbors need to learn” she explained, “and besides I’m leaning how to improve my water coloring from another neighbor.”

No Age, No Nationality

The thing I really enjoy is that these communities know no nationality, or age and it is almost always both male and female, married and single. The common denominator is the subject, a zest for new things and embracing a new phase in their lives.