5 Reasons Nueva Gorgona has the Best Spot on the Map

Anyone keeping a close eye on coastal real estate in Panama knows about Nueva Gorgona. Its prime location, supreme beauty, and up-and-coming atmosphere have captured the interest of those looking to get in early on Panama’s next big beach town.

As one of Coronado’s first expat residents, I’ve had many years to grow intimately familiar with Gorgona, our neighbor to the East. This last year in particular has surfaced some exciting changes for Gorgona, with even more progress on the horizon. Learn why Gorgona has become such a promising place, and why investors- both local and foreign- have started to take note.

Proximity to Panama City is a major consideration when buying property in Panama. Besides being an obvious benefit for those living in or frequently traveling to the capital, such close proximity increases a property’s rental value.

Nueva Gorgona is on its way to becoming a viable option for those seeking a convenient coastal getaway. As one of the closest modern beaches to Panama City, this up-and-coming community is becoming a hit with both city dwellers and tourists.

Coronado has a large expat population, one of the key drivers in the modernization of the community. There are four supermarkets, several banks, a wide selection of restaurants, and even an organic store. Coronado presents a level of creature comforts that can’t been found in any other beach town in Panama.

Nueva Gorgona will follow in Coronado’s footsteps. In the meantime, for those who want to get in early, a 10-minute car ride puts you right in the heart of Coronado.

Feeling more adventurous? Time the tides right, and you could even zip an ATV down the beach from Gorgona to Coronado, avoiding the roads altogether! I can vouch- a breezy ATV ride down the coast is a great way to follow up dinner with friends.

3. It’s one of the most beautiful beaches in Panama. 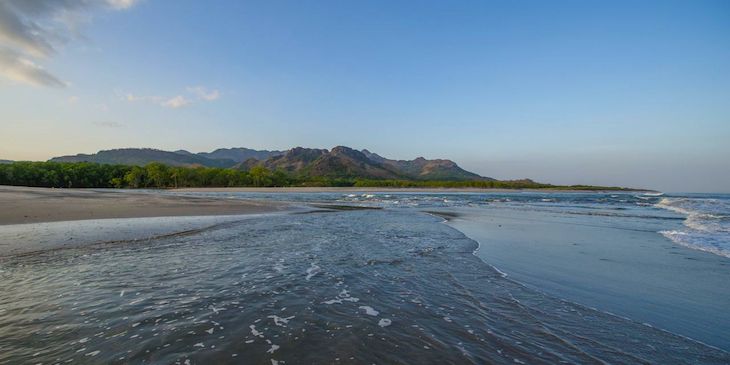 Gorgona’s premier beach, Playa Malibu, is unlike anything else on Panama’s Gold Coast. With a rolling green mountain backdrop, Gorgona’s beaches offer up a breaktaking panoramic view from sunrise to sunset. Some sights tend to lose their effect after awhile, but every time I go to Gorgona I’m taken aback by its beauty.

In Nueva Gorgona, it’s not uncommon to have the entire beach to yourself. Virtually undiscovered, the area has the advantage of being more private and tranquil than other beaches.

I live in (and love) Coronado, yet I still find myself sneaking off to Gorgona on occasion to soak in the area’s rare level of beauty and seclusion. 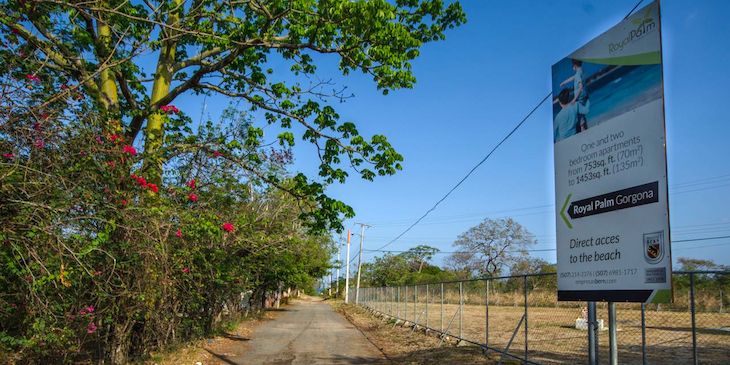 Now that Coronado has paved (literally and figuratively) the way for luxury beachside communities in Panama, Gorgona is the next logical step in the development of the Gold Coast..

While real estate development in Coronado has slowed (due, in part, to the lessening amount of available beachfront space) Gorgona is just about to get started. With new resort-style developments like Royal Palm on the horizon, it will not belong before Gorgona starts to make the headlines.

We are headed your way next month for a holiday and to research a possible retirement home. Where would you recommend to stay? We dont want to stay somewhere like a Sheraton all-inclusive as we want to get a feel for the place?

What kind of calling card can I get to make phone calls to Canada? do they sell them in Panama?
Are public phones everywhere?

Hi Robert, Public phones are not really that common, nearly everyone in Panama has a cell phone and it’s fairly cheap and easy to get a pre-paid SIM with some data on it, and use data to make international calls (eg via Whatsapp or Skype). You can get calling cards at local convenience stores though.

Looking for single family home.
150k us beachfront is that possible there?

Hi Jason, $150k for an absolute beachfront home would probably not be feasible in areas like Coronado and Nueva Gorgona. In less developed areas, it may be possible, but you would be far from a number of amenities, and it could still be a stretch on that budget if you were looking to buy a home on a piece of land. You could be able to find beachfront condominiums that may fall into that budget, but I would do your research on the quality of construction and management of the building first.

Hello:
Just wondering if you had any info on the restaurant at Bahia. We heard that Bluwater Bistro had closed and that someone was going to take it over in August 2016.

Hi James….Bluwater Bistro has closed, and a new restaurant has only very recently opened up…I haven’t had a chance to visit it yet! I’m hoping the food is as delicious as Chef Sasha Woodwards food at Bluwater 🙂 Liz

I am confused by your website. Do you only represent Bern properties or all real estate.

Hi Sandra, I do work directly with Empresas Bern on their projects, and I started the newsletter as I get lots of questions about moving to and living in Panama having been here a few years now so I thought, ‘why not share the info!’ I am always happy to point people in the right direction if they are looking for something different, though.

can you recommend a local realtor who speaks English. Thinking of relocating from Spain and retiring

Hi Paul,
Thanks for your message, I’m glad you enjoyed it! I’ll send you some info by email.
Liz